Sarah’s accent was thick and melodic, familiar in a way. His mother had been Scottish though he hardly remembered her. Still, Gareth kept his pout in place. The truth was, he didn’t know how to relate to others. Even people who could feel at ease talking to perfect strangers stammered or spoke quickly to him and walked away. The wheelchair did more than keep him from playing.She straightened the collar of his waistcoat. “Look, there’s a little girl comin’ now. She looks to be about Tabitha’s age. Maybe a wee bit older.”

He did glance then, but just under his lashes, not to give the impression that he cared. Easier to act like he didn’t care than to show he truly did. He refused to give anyone more reason to feel sorry for him. No one pities an angry person.He missed Tabitha…Tabitha Fitzgerald, his grandfather, Lord Gerald Smyth, Earl of Pensees’s bastard daughter. But ward was her polite title. At five years old, she had been the only person he allowed to get close. Maybe it was the way she would climb up in his lap, never caring about the wheelchair.

She didn’t see it when she looked at him; she only saw Gareth.He never spoke to Tabitha about who her parents really were, but she knew. For some reason, servants believed children to be both deaf and dumb and gossiped openly around them. That’s how Gareth knew the truth about his own mother. He was told she died, but he’d overheard the maids say she had run back home to Scotland and how they didn’t blame her. It’s also how he’d learned the truth of his own father’s death—shot by his mistress’s jealous husband.“I’m heading off. I’ll be sure to get ye a sweet roll for later.”

Gareth only grunted in response.

When the maid turned away, Gareth allowed himself to watch the little girl play. Her hair was a darker blonde than Tabitha’s and had streaks of amber. She looked to be a bit taller, too, as she ran around in a green day dress and stockings. She pushed a hoop along until she reached the tree. Once there, she looked both ways. Her eyes met Gareth’s, and for a moment, he was tempted to turn away to keep her from doing it first. Instead, she smiled broadly and beckoned him closer.

Gareth wheeled his chair to the tree trunk, his curiosity getting the better of him. The girl dropped the hoop on the ground and took hold of the lowest branch. She whispered in an accent he didn’t recognize, “Keep watch for me and call out if you see anyone coming.”
His chin tucked in and his eyes grew wide. She took it as assent and nodded, starting her climb. She was spirited like Tabitha. The thought of being able to climb a tree at all pricked at Gareth’s heart. He would never get to climb a tree.

Again he put on his bored expression. No one needed to know he was jealous of the girl. Gareth made a habit of never owning his true feelings. It was his protective covering. With his lids half closed, he tried not to watch the girl or keep an eye out for anyone else’s approach. Without his permission, his gaze returned to the girl’s powder-white limbs as she climbed higher than most children did.

Soon she was too high up.

Gareth adjusted himself in his seat, his eyes darting around. Instead of keeping lookout, he hoped for some adult to show up and tell the girl to come down.

The girl called in a harsh whisper. “Look! Watch this.”

She scooted out on a branch, making her way to a bird’s nest. The limb wobbled as she got closer to the end.

He was about to call out a warning to her when it was too late. The branch snapped. The little girl was falling with barely a squeal.

All Gareth could think was that he needed to do something. He rushed toward her and blinked. How? He didn’t know how he had caught her but he had. Her giant, brown eyes grew as he held her, several feet above the ground. Then she looked down, and her eyes became wider. He swallowed hard and, in a rush, touched the ground, placed the girl on the grass, and flew back to his chair

His heart still pounded in his ears as he sat. He tried to mask his confusion as he masked all other uncomfortable emotions, but it wasn’t working. The girl stared at him, but said nothing as a dark-haired woman rushed toward her.

“Sweeting, are you ok?” The woman swept the girl up into her arms. “I got here as fast as I could. I can’t believe you did that. I thought I told you not to climb that tree.”

She put the girl back down and looked her over, grabbing her head and looking for a sign of injury. “Aren’t you hurt at all? I saw you falling from the window upstairs.”

The girl shook her head too quickly, like she was still in shock.

“Come on back to the house,” the pinch-faced woman snapped, ushering the little girl away.

The girl yanked her hand free of the woman’s grasp and rushed back to Gareth. She placed an object in his hand and kissed his cheek.
“You were amazing,” she whispered and turned back to the woman who called out her name.

Gareth’s cheeks burned. What did the woman say the girl’s name was? He didn’t hear with the blood rushing to his ear drums. Jessie? Jenny?
The woman scolded the girl as she returned to her. “What did you do? Where are your manners? You don’t talk to cripples. Best to act like you don’t see them at all.”

The words struck Gareth like a bucket of cold water, but he let it slide off him as he thought about the fact that he had actually flown. He watched after the girl as her dark eyes stared back. His mind was muddled at what had happened. The muscles in his face hardened, and he stared at the woman’s back as they retreated.

Shaking his head, he remembered he was supposed to be heading to Mr. Strong’s house. He pushed the wheels of his chair down the road again. He’d forgotten he was holding something and nearly dropped it. The small, pale blue-green stone had a few dark wrinkles, but almost looked like a robin’s egg. He put it to his nose. The flowery scent of the stone smelled just like the girl.

Gareth was so caught up in staring at how tiny the stone was in his palm, he’d forgotten all about Mr. Strong until the man called his name. “Master Tristan, what are you doing out here? You were to report to my house a quarter of an hour ago.”

“I prefer Gareth.” He narrowed his eyes at the pale, feeble man.

Mr. Strong ran a hand through his sparse, blond hair and smiled, his lips forming a thin line. “Yes, of course.”

Mr. Strong placed himself behind Gareth’s chair and pushed down the lane. “I have an excellent plan for your studies today. I see you’ve brought no supplies from your home but no matter. I have plenty of paper and pens to practice your lettering…”

Gareth rolled his eyes, knowing Mr. Strong couldn’t see. The man’s cheerful babble continued as he pushed him toward the house past the inn. The stone rolled between Gareth’s fingers, and he remembered the feeling of the girl’s lips on his cheek.

Part Steampunk, part Fantasy, all Romance…
When a crippled young lord rescues a girl falling from a tree, it reveals a secret about himself and his mother’s side of the family that could put him at the center of a war with beings he thought only existed in fairy tales. Tristan Gareth Smyth lived his entire life stuck at home at Waverly Park and left behind while his Grandfather makes trips to London, all because of his blasted wheelchair. Then an American heiress falls in his lap, literally, and he must find a way to keep her at a distance to protect not only his secret, but everyone around him from an assassin sent to kill him.

Darkness can be overcome… Terminally ill Lynette Lamb is forced to reunite her wayward son and grandson. Her options are as limited as her strength and mobility. Through a fateful series of events, the rejoined pair will leave Earth to become part of a colony orbiting a new planet. Sam Austin and his wife mourn the loss of their only child and decide to make a fresh start at the space station. The same ship holds the one who will fulfill the dark planet’s prophecy, but a demonic force boards to stop the vessel. The demon’s obedient but unwilling servant is sent on a suicide mission to keep the ship from reaching its destination.

Chira Kelly thought she didn’t need anyone…until she met Ben. Because of one ugly rumor, Chira lives as an outcast at her school. Which is fine with her, because she works better alone. Always has, always will. And at least she has her one and only true friend, Tasha. When Tasha insists that they join a group to visit a possibly haunted abandoned old schoolhouse, she’s wary, but joins her friend. Because of that decision, their lives are in jeopardy as a malevolent spirit targets the group. Tragedies and accidents pick them off one by one, and Chira finds herself drawn to the one person who can see the truth. But can he protect her? *A Young Adult Paranormal Romance – Urban Fantasy with a blend of Mystery*

Left Behind for the Hunger Games generation

In a heart-racing thriller described as Falling Skies meet The Walking Dead, Jennie struggles to find a safe place for what’s left of her family. But it seems as though there is no place sacred, no place secure. First the aliens attacked the sun, making it dimmer, weaker, and half what it used to be. Then they attacked the water supply, killing one-third of Earth’s population with a bitter contaminate. And when they unleash a new terror on humankind, the victims will wish for death, but will not find it… When the world shatters to pieces around her, will Jennie find the strength she needs to keep going? Pauline Creeden is a horse trainer from Virginia, but writing is her therapy. In her fiction, she creates worlds that are both familiar and strange, often pulling the veil between dimensions. She becomes the main character in each of her stories, and because she has ADD, she will get bored if she pretends to be one person for too long. Enter to win one of three swag packs. Open to US only. 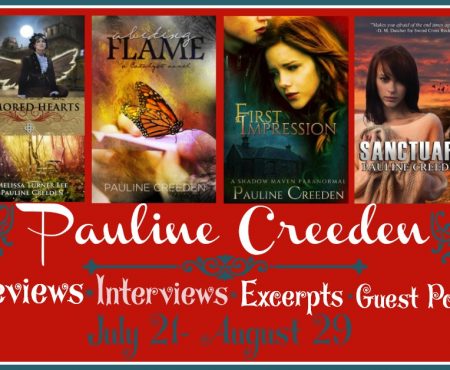